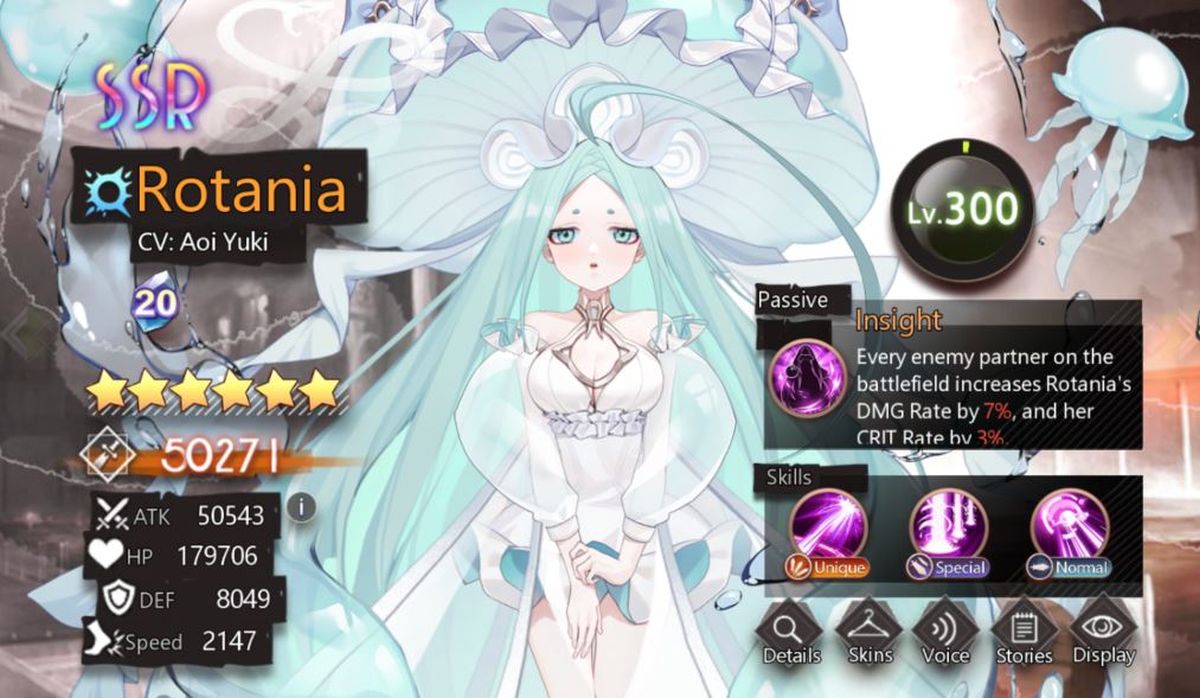 Next up, we’re about to hop into a complete Illusion Connect guide for Rotania, the Sorcerer character in charge of Uroboros. Rotania is one of my personal favorites when it comes to her character design and skills, being able to deal massive amounts of AoE damage.

She doesn’t currently have Awakening, but that doesn’t mean she is not strong. Rotania shines when there are a lot of enemies on the field since her damage proportionally increases with the number of enemies. Not only is she an amazing unit to deal with a large number of opponents, but she’s also able to deal more damage to the Summoned units (so she’s a great Partner vs Summoner class).

In this article, you can find everything you need to know about Rotania, as well as which equipment would be best for her. So without further ado, let’s check it out!

Passive: Every enemy partner on the battlefield increases Rotania’s DMG Rate by 7% and her Crit Rate by 3%.

Special: Attacks enemies in one column dealing 120% damage, increasing Crit Rate by 35% while attacking. Chance to use skill 30%.

The Best Equipment for Rotania

In my opinion, this is the best equipment for Rotania in Illusion Connect. She will make use of any type of AoE DMG increase, as well as Crit. However, I would just recommend increases to her ATK since she passively gets more Crit.

Her best weapon is 100% Staff of Hope, the SSR staff that is typically great for any Sorcerer or damage dealer with AoE damage. For armor, anything works – really anything, since Rotania will probably die to any attack (she’s extremely squishy). So, I would recommend Nightmare Robe for the chance to restore some additional HP.

Her ideal boots are either Witch’s Dance Boots or Rosy Allure (UR). I personally love Rosy Allure (UR) since you’ll probably deploy Rotania in order to clear the enemy’s field. So, the one-time-only boost to ATK is massive.

Phoenix Eyeglasses, Dream Prism, Fiery Shawl or Eternal Spinning Top (UR) are all really great options for the accessory – pick whichever you want and have.

If you are interested in reading the lore behind Rotania as a character and how she came to be the way she is, you can check out the story below. It is unlocked by increasing your intimacy level with her.

Although Rotania is the leader of Uroboros, she’s actually just a child – or rather, a teenager? She’s evil when it comes to others, but she just casually enjoys gaming and having fun. Oh, and dolls.